We Future Cycle and The Science Barge are teaming up to bring environmental education and hands-on every day source separation to a local elementary school. The program is sponsored by the school’s PTA and championed by the principal.

Jennifer Sloan, Director of Education of The Science Barge, gave the introductory presentation to the students.  Neatly sitting and attentive were 150 students ranging from Kindergarten to 5th grade, listening to the fascinating story of garbage through times.

Did you know there were once “Piggeries” in New York? Pigs were kept in Central Park and were let out at night to roam the city and eat the garbage off the streets.  The kids were giggling to no end when the presentation included a cartoon piggy, um, leaving its own waste on the street, illustrating that pigs roaming the street may not be the best waste management solution after all!

Ms. Sloan very skillfully and with great energy combined science with social studies explaining what garbage is, why it is a problem, and how kids can be empowered to tackle this problem. It was heart-warming to see how attentive and engaged the students were to her presentation.

We Future Cycle guided the students through a Waste Audit as well as a Waste Analysis. Students counted, charted, weighed and identify what waste is being generated at school.

After establishing the current waste situation, the students helped setting up a recycling station to sort the materials into left over liquid, milk cartons, commingled, compost, trays and remaining trash.

It was eye-opening for students and staff to see the mountains of untouched food sorted out, that was normally going straight in the garbage. In this s

chool with 300 students, there were 63 pieces of fruit, 73 pre-packaged vegetables, 15 apple sauce containers and 3 milks completely untouched. We Future Cycle is now helping this school to donate this food to a local agency. 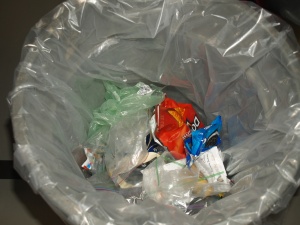