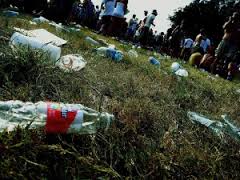 going all out when it comes to Recycling……. but New Rochelle is not following.

The Source separation law is in effect since the late 80ies and here we are in 2013 and there are still no Recycling cans in sight.

How can we teach our children about recycling if no logistics are provided.

Especially at the ball fields, because, guess what, there are mainly bottles and cans discarded there. I did a survey and found 800 beverage containers per weekend day at the ALMS and Ward Ball fields alone. And no recycling can!

Here is an article on what Central Park is doing, it should be an example to New Rochelle.

Central Park recycling to get an overhaul:

Trash and recycling bins in New York City’s Central Park will be replaced with more than 700 new receptacles.

The Central Park Conservancy, in partnership with aluminum recycler Alcoa Inc., will replace existing plastic bins with receptacles made from 30% recycled aluminum, as well as adding more than 400 new bins, the Conservancy announced. The new bins are designed to prevent trash overflow and access by pests.

“With three times as many people visiting the park now compared to 1980, the Conservancy has to stay ahead of the curve when it comes to smart management,” Douglas Blonsky, president and CEO of the Central Park Conservancy, said in a statement. “New bins in smarter locations means a more environmentally friendly, efficient collection system that helps 40 million visitors a year continue to enjoy the park they love.”

The additions will nearly double the number of recycling receptacles in Manhattan, the Conservancy said.